THE GREATEST COMFORT, ELEGANCE AND PERFORMANCE

Cristina Mazzantini, curator of the ‘Quirinale Contemporaneo’ and ‘Contemporanei a Palazzo Borromeo’ projects, talks about how contemporary art and design can enhance public buildings

The adjective ‘unforgettable’ sums up in one word my experience as curator and designer of Quirinale Contemporaneo and then of Contemporanei a Palazzo Borromeo. These initiatives saw two hundred contemporary artworks transferred to the Italian Presidential Offices and twenty-five to the Embassy of Italy to the Holy See. However, to sum up the complexity of the work carried out, we need to add a few more words.

It was indeed a multifaceted and extraordinary experience, made possible by a productive collaboration with the various offices of the Secretary General of the Italian Presidency and the Embassy of Italy to the Holy See, with the artists and archives or foundations that represent them, the designers and companies and, finally, with the publishers of the catalogues, Treccani and Fondazione Listri per le Arti Visive. As the projects developed, their heartfelt and proud participation was clear to see.

The experience was challenging because both projects were subject to a number of constraints, and came to fruition thanks to the pro bono contribution of those who took part. And complex too, because the projects required a holistic approach, considering not only the strictly historical-artistic profiles in the selection of the participants, but also the protection of the sites and the various aspects linked to museography and restoration, as well as interior design. It should be emphasised that, although on a different scale, neither project was limited simply to the activities involved in organising an exhibition, i.e. the selection and positioning of the works, but involved a meticulous appraisal of the interiors and gardens, focusing on revitalising the image of these buildings which, beyond the museum aspect, represent our country today. Therefore, for these initiatives, some of the interiors that did not have any original decorative features, such as the Torrino in the Quirinale and the Salone degli Arazzi in Palazzo Borromeo, were reimagined as a whole, giving plenty of scope for design.

The experience was extraordinary because it took on an innovative approach, aimed at redesigning the visual identity of these public buildings and bringing it up to date. Quirinale Contemporaneo, with the endorsement of President Sergio Mattarella and realized as an evolving project under the careful direction of the Secretary General of the Italian Presidency, Ugo Zampetti, has brought the building back into the flow of time, making it dynamic, ever-changing and influenced by the passing of the artistic seasons. The project has set a standard, as demonstrated by the Contemporanei a Palazzo Borromeo initiative promoted by Ambassador Pietro Sebastiani, and differs from other projects previously undertaken by other institutions, such as the Ministry of Foreign Affairs of Italy, the Chamber of Deputies, or the Bundestag, which had already acquired contemporary artworks to promote national creativity or to decorate their premises. These institutions did not have an artistic heritage of note; on the contrary, they wanted to build new collections or complement renovation projects. In 2011, for example, I was personally involved in the introduction of contemporary art into the new parliamentary chamber in the Palazzo dei Gruppi, creating the Chamber of Deputies Prize for the 150th anniversary of the Unification of Italy to acquire a site-specific artistic backdrop for the new chamber, again under the guidance of Ugo Zampetti, then Secretary General of that branch of Parliament.

At the Quirinale, on the other hand, the situation was quite different: the building is an exceptional example of conservation, and the artistic heritage of the presidential estate, which includes over one hundred thousand artistic pieces in its inventory, is incredible. The second important innovation of Quirinale Contemporaneo was the introduction of the concept of contemporary living in the offices through Made in Italy design. This takes its cue from President Mattarella’s desire to go beyond the idea of a museum and to give back to the Quirinale an image closer to that of the ‘Home of All Italians’.

The real challenge of the Quirinale Contemporaneo and Contemporanei a Palazzo Borromeo projects was therefore to integrate the new works seamlessly within the historical context, breathing new life into the buildings. An intention expressed in the titles of the projects, which convey the desire to display contemporary works alongside the buildings. The decision not to draw on the heritage of state-owned museums, and to only approach artists and companies willing to loan or donate works free of charge, made an already challenging task even more compelling, given the prestige of the buildings: we shouldn’t forget that the Quirinale, which has housed the State's highest authority since 1583, has seen the work of the greatest talents of the last four centuries and that Pope Pius IV de’ Medici commissioned Pirro Ligorio to design Palazzo Borromeo in 1561. Against this backdrop, it was not a foregone conclusion that the new works would live up to what was already there.

My previous experience, working for long periods in magnificent public buildings such as Palazzo Farnese or Palazzo Montecitorio, where the succession of architects and artists of the calibre of Michelangelo and Vignola, or Bernini and Fontana shows that the past and the present never stop reinventing themselves, has taught me that we need to delve into history in order to connect with places before imagining any transformation. It convinced me that in order not to take away the ambience of the setting and to improve it, it is important to ensure a balance between old and new and to restore that successful cultural continuity that is so striking in Italy. Over the years, I have become convinced that the unique and amazing character of the Italian landscape and architecture lies precisely in the centuries-old layering of cultural values and memories, of art and beauty, which, beyond any form of the avant-garde, makes having some kind of relationship with our creative tradition absolutely essential. Tradition which, in the words attributed to Gustav Mahler, ‘is not the worship of ashes, but the preservation of fire’; tradition which, to quote Salvatore Settis, ‘means inheriting something and appropriating it to transform it into something else’. That is why the gradual and continuous layering of architecture cannot be left in abeyance for too long, especially in buildings that have a public function. I often say to students of Preservation Design at the Polytechnic University of Milan that when the intrinsic dynamics of architecture associated with the changing use come to a halt, places lie dormant and become the subject of study for archaeologists. Conversely, architects are interested in spaces that can evolve with a balance between conservation and innovation. Places thrive where stratification continues and future generations add something new to what is already there, but this only adds value if it is something worthy of becoming historical one day. For this reason, I urge them to take up the challenge of enhancing our artistic heritage, innovating without being reckless.

"THE EXPERIENCE WAS EXTRAORDINARY BECAUSE IT TOOK ON AN INNOVATIVE APPROACH, AIMED AT REDESIGNING THE VISUAL IDENTITY OF THESE PUBLIC BUILDINGS AND BRINGING IT UP TO DATE"

Drawing on this experience, taking the necessary holistic approach and paying due attention to the sensitivity of the sites, the renovation was designed leaving aside the excesses of conservation per se, but with strict discipline and full respect for the history of the buildings. Contemporary style, introduced without arbitrary overlapping or superfluous contrasts, brings the public buildings to life, giving them a more citizen-friendly visual dimension. The works blend into the surroundings, enriching them with an intriguing interplay of cross-references, demonstrating that contemporary art can happily sit alongside Renaissance or Baroque art, without the need for a ‘white cube’ or an otherworldly installation. Blended with the richness of the inlays or the splendour of the gilding, design pieces enhance the handcrafted upholstery of the sofas, the cabinetmaking of Piffetti or Maggiolini, the seventeenth-century coin cabinets and the Medici tapestries; they also improve the enjoyment of the rooms, improving the lighting and making them more comfortable and welcoming.

The two hundred works displayed across the Italian Presidential Offices, as well as the twenty-five decorating the Embassy of Italy to the Holy See, have reignited the dialogue between creators and successors of the same tradition and today seem to be part of the image and identity of the sites.

With the aim of illustrating the trends and prominent figures in the Italian cultural scene since the Second World War, over fifty artists and eighty designers are featured at the Quirinale, while ten artists and ten designers were carefully selected to present works at Palazzo Borromeo. De Chirico, Afro, Consagra, Fontana, Burri, Pistoletto, Isgrò, Vedova, Manzoni, Castellani, Boetti, Finucci and Listri alongside Gio Ponti, Magistretti, Mangiarotti, Sottsass, Castiglioni, Dorfles, Munari, Scarpa, Binfaré, Mendini and Pesce, to name just a few.

Edra enthusiastically participated in both projects and seems to fully share this philosophy. The selected items, the product of creative genius and know-how, are representative of the marriage between tradition and innovation. The flexible, sculptural forms, the quality of the materials and the attention to detail do not conceal the artistic ambition; the ‘smart’ cushions with their quality of movement are the epitome of innovation in the field of industrial design and ergonomics technology research.

On display at the Quirinale is the sinuous silver Flap sofa, a masterpiece by Francesco Binfaré, which welcomes guests in the refined setting of the Torrino, while three small tables from the Cicladi series, designed by Jacopo Foggini, with jagged-edged alabaster tops, are located in the eighteenth-century Sala di Druso lounge.

At Palazzo Borromeo, three Essential sofas, upholstered in cardinal red velvet, bring vibrancy to the Salone degli Arazzi. The Margherita and Tatlin pieces, photographed in the Sala della Loggia and entrance hall, hold their own against the bronzes, archaeological artefacts and other works of art with a cool confidence. Almost as if to playfully reinforce the fact that design - which has incorporated ideas from globalisation and the market and managed to modernise production - can be seen as a conceptual and democratic art form that perfectly represents the Republic of Italy. 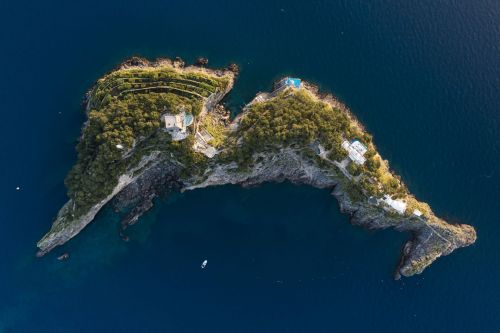 Li Galli, The Island of the Sirens 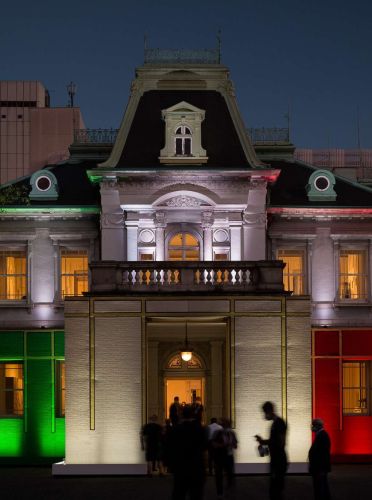 Sport, art and furniture intertwine in history and values 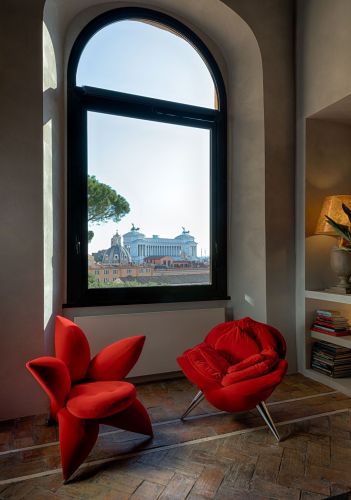 A wonder in the heart of Rome